As usual SWRB does not necessarily agree with every point made in every resource or landing page to which we link -- we only agree with that which is in accord with what God teaches in the Bible. ALSO LANGUAGE WARNING THROUGHOUT THE VIDEOS ON THESE PAGES.


Undercover Video: "How to Commit Voter Fraud on a Massive Scale": Part II of Project Veritas Investigation into Clinton Network 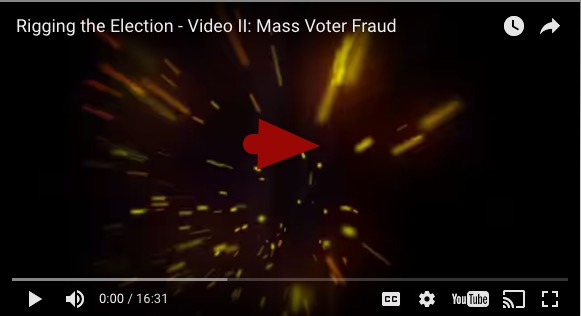 
Below are some Web sites reporting on the latest Wikileaks and much more that you will not hear through the Godless, "liberal", left wing media (CNN, NBC, ABC, CBS, MSNBC, CBC, et al.). Christian discretion is still necessary while viewing these Web sites.

Hillary Clinton just said that Christians must deny their Faith through the enforcement of laws, by stating that the Christian belief in being pro-life, and anti-abortion, must change, and that this should be done through laws and "political will." If Christians must change Christian teachings in regards to abortion, then what Hillary Clinton is essentially saying is that Christians must deny their Faith. Hillary Clinton, speaking at the Women in the World Summit on April 23, made the statement: "Far too many women are denied access to reproductive health care and safe childbirth, and laws don't count for much if they're not enforced. Rights have to exist in practice -- not just on paper. Laws have to be backed up with resources and political will. And deep-seated cultural codes, religious beliefs and structural biases have to be changed." - From " Hillary Clinton: Christians In America Must Deny Their Faith In Christianity"


Hillary Clinton "Took Me Through Hell" Says 12 Year Old Rape Victim -- and Hillary Laughed (In Taped Interview) About Lying Regarding This Case (Video, 9:46)

“Muslims are peaceful and tolerant people and have nothing whatsoever to do with terrorism.” - Hillary Clinton.


ISIS Repeats the Atrocities of Muhammad Step by Step


The Islamic State Is Obeying the Koran & Muhammad


Demonstrates how and why the Islamic State is following the Koran and Muhammad, contrary to the lies told by Godless politicians, the Godless media and others.


Hillary Clinton Is Corrupt and Evil

“The Clinton Foundation…disclosed in 2008 that it had accepted up to US$25 million from the Saudi Kingdom in the same year. Other foreign governments who have donated money to the Clintons include…Kuwait, Qatar, Brunei, Oman…” Hillary Clinton is bought and paid for. “Saudis Fund 20% of Clinton Presidential Campaign: Top Prince,” teleSUR, June 13, 2016: … Saudi Arabia has paid more than 20 percent of the cost of Hillary Clinton’s campaign for presidential elections, Saudi Deputy Crown Prince Mohammed bin Salman was quoted as saying Sunday in a news report by the Jordanian Petra News Agency.  - Saudis funding 20% of Hillary Clinton’s presidential campaign (June 18, 2016)


What Is A Christian Nation? Christ's Kingship And Lordship Over the Nations by Greg Price (17 Free MP3s)


The Puritan Hard Drive is the must have digital learning device for Puritan and Reformed studies.


There is no other way to get such easy, convenient and inexpensive access to so many great works from the best Reformation and Puritan preachers and teachers, past and present -- and the study software on the Puritan Hard Drive is out of this world in terms of usefulness!


If necessary, sell what you have (that does not draw you closer to God) to get the Puritan Hard Drive, and prayerfully use it until you become, by the Lord's sovereign and sanctifying grace, the most extraordinary Christian you can be (for His glory!).


- Pastor W.J. Mencarow (Reformation Church, Boerne, Texas - San Antonio area, https://worldunderchrist.wordpress.com/ and on Sermonaudio at https://www.sermonaudio.com/reformation), Author, Editor of The Paper Source Journal, and has been interviewed on numerous radio and TV programs including "Good Morning America," most networks and in major U.S. newspapers and magazines, etc.