Evolution Is Religion -- Not Science by Henry Morris, Ph.D.

Evolution Is Religion -- Not Science by Henry Morris, Ph.D.


Excerpt: The writer has documented in two recent Impact articles from admissions by evolutionists that the idea of particles-to-people evolution does not meet the criteria of a scientific theory. There are no evolutionary transitions that have ever been observed, either during human history or in the fossil record of the past; and the universal law of entropy seems to make it impossible on any significant scale. ... In closing this summary of the scientific case against evolution (and, therefore, for creation), the reader is reminded again that all quotations in the article are from doctrinaire evolutionists. No Bible references are included, and no statements by creationists. The evolutionists themselves, to all intents and purposes, have shown that evolutionism is not science, but religious faith in atheism. Click here to read more.

"Evolution is promoted by its practitioners as more than mere science. Evolution is promulgated as an ideology, a secular religion - a full-fledged alternative to Christianity, with meaning and morality. I am an ardent evolutionist and an ex-Christian, but I must admit in this one complaint. . . the literalists (i.e., creationists) are absolutely right. Evolution is a religion. This was true of evolution in the beginning, and it is true of evolution still today." - Dr. Michael Ruse, author, Darwinism Defended: A Guide to the Evolution Controversies


Refuting Evolution: A handbook for students, parents, and teachers countering the latest arguments for evolution by Jonathan Sarfati, Ph.D., F.M.


Includes an excellent chart comparing the differences between "operations science" and "origins science."


Why evolution is not "science"


Evolutionists claim that evolution is "science" and creation is "religion." Eric Hovind and Paul Taylor discuss why evolution has nothing to do with science. That's right, both creation and evolution are religious. 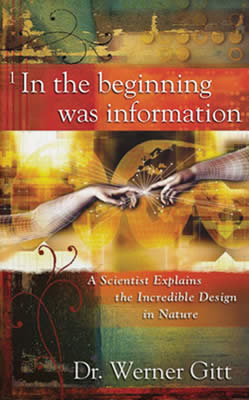 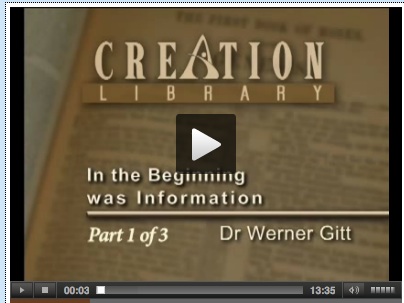 For the invisible things of him from the creation of the world are clearly seen, being understood by the things that are made, even his eternal power and Godhead; so that they are without excuse. - Romans 1:20 (KJV)

In the Beginning Was Information, A Scientist Explains the Incredible Design in Nature by Dr. Werner Gitt (Free Online Book At Answers In Genesis)


Between the covers of this excellent book may well be the most devastating scientific argument against the idea that life could form by natural processes. The science of information is explained in detail, with many striking examples to clarify fundamental questions, such as: What are the laws of information? How did language develop? Is artificial intelligence possible?


Because information is required for all life processes, it can be stated unequivocally that information is an essential characteristic of all life. All efforts to explain life processes in terms of physics and chemistry only will always be unsuccessful. This is the fundamental problem confronting present-day biology, which is based on evolution.


The purpose of this book is to formulate the concept of information as widely and as deeply as necessary. The reader will eventually be able to answer general questions about the origin of life as far as it is scientifically possible. If we can successfully formulate natural laws for information, then we will have found a new key for evaluating evolutionary ideas. In addition, it will become possible to develop an alternative model which refutes the doctrine of evolution.

Contents of the Book In the Beginning Was Information, A Scientist Explains the Incredible Design in Nature by Dr. Werner Gitt (Free Online At Answers In Genesis)


Preliminary Remarks about the Concept of Information


Principles of Laws of Nature


Information Is a Fundamental Entity


The Five Levels of the Information Concept


Delineation of the Information Concept


The Three Forms in which Information Appears


The Quality and Usefulness of Information


Some Quantitative Evaluations of Semantics


Life Requires a Source of Information


The Quality and Usefulness of Biblical Information


Aspects of Information as Found in the Bible


A Biblical Analogy of the Four Fundamental Entities-Mass, Energy, Information, and Will


Appendix 1: The Statistical View of Information


Appendix 2: Language: The Medium for Creating, Communicating, and Storing Information

In the Beginning Was Information, A Scientist Explains the Incredible Design in Nature by Dr. Werner Gitt (Softcover Book and eBook At Answers In Genesis)

Energy and matter are considered to be basic universal quantities. However, the concept of information has become just as fundamental and far-reaching, justifying its categorization as the third fundamental quantity. One of the intrinsic characteristics of life is information. A rigorous analysis of the characteristics of information demonstrates that living things intrinsically reflect both the mind and will of their Creator. The Bible has long made it clear that the creation of the original groups of fully operational living creatures, programmed to transmit their information to their descendants, was the deliberate act of the mind and the will of the Creator, the great Logos Jesus Christ. We have already shown that life is overwhelmingly loaded with information; it should be clear that a rigorous application of the science of information is devastating to materialistic philosophy in the guise of evolution, and strongly supportive of Genesis creation.

Our Solar System, Evidence of Creation by Spike Psarris, Worked at NASA (Free Video from the Seattle Creation Conference)

IS THE BIBLE RELEVANT IN AN AGE OF SCIENCE? BY DR. JOHN HARTNETT (FREE VIDEO) & OTHER FREE CREATIONIST VIDEOS, MP3s & BOOKS

6 Day Creation & The Presuppositions of Science: How Important Is Creationism by William J. Mencarow

FREE VIDEO: The Problem of Evil by John MacArthur (from Ligonier Ministries' Contending for the Truth, 2007 National Conference


I was one of those who had profited much from using the plethora of out-of-print Reformation materials offered by Still Waters Revival Books in the 62 CDs (Puritan CDs and Reformation CDs) for a number of years in  my ministry -- works that I could only have found in select libraries (usually hundreds of miles away from my residence).


With the CDs, it took a little while to go to the index of each set, locate the documents I needed, and then find the correct CD. Of course, the time was always well spent in finding that particular document that I needed.


However, now that I have the Puritan Hard Drive, I am able to use my time much more efficiently in finding that particular document I need by quickly searching for it and finding it in a matter of seconds. It's like going from "dial up" to "high-speed" Internet!


And for all of those documents that have a font that are in block letters, I am able to simply cut and paste from the Puritan Hard Drive to my own document with ease.


If you want to understand Reformed theology (i.e., the whole counsel of God) the Puritan Hard Drive is unsurpassed, outside the Bible itself. The First and Second Reformations gave us the most faithful Scriptural teaching and preaching since the time of the Apostles, and there is no other resource, outside Scripture itself, where you can find so much of God's truth as in the Puritan Hard Drive.


May the Lord continue to use this most profitable tool to promote a Third Reformation that encompasses the whole world (Isaiah 2:2-4)!


Evolution Is Religion -- Not Science by Henry Morris, Ph.D.