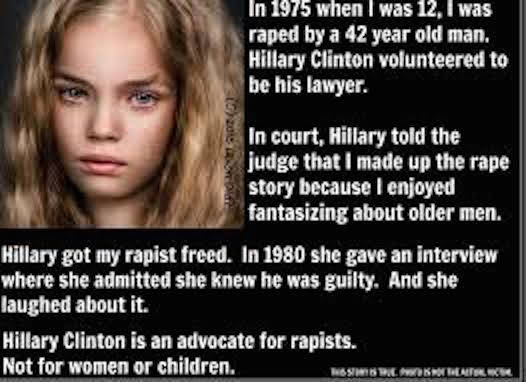 Hillary Clinton "Took Me Through Hell" Says 12-Year-Old Rape Victim -- and Hillary Laughed (In Taped Interview) About Lying Regarding This Case (Video, 9:46)


Excerpt: "Hillary tapes reveal she voluntarily defended a child rapist that she knew was guilty. In this 1980's taped interview, Hillary Clinton laughed about getting the convicted rapist of a 12 year old child off on a technicality. Hillary got him off with time served in county jail, about 2 months. She says she used a legal technicality to plead her client, who faced 30 years to life in prison, down to a lesser charge." Links to all facts and documentation here. ... The audio recordings also capture Hillary chuckling about her efforts to exploit the local authorities' mistake, which ultimately allowed her client to get off with an extremely reduced sentence on lesser charges. Her laughter over decidedly unfunny developments is strange and off-putting. A legal expert quoted by the Washington Free Beacon, which published the original story, also questioned the ethics of Clinton revealing the results of her client's polygraph test. She told a reporter that the accused man passed the test, which "forever destroyed my faith in polygraphs," a clear indication that Hillary knew of her client's guilt. The Free Beacon piece did not quote the victim extensively, saying that the woman (now 52 years old) declined an interview. In a long, emotional interview with The Daily Beast, she accused Clinton of intentionally lying about her in court documents, going to extraordinary lengths to discredit evidence of the rape, and later callously acknowledging and laughing about her attackers' guilt on the recordings. "Hillary Clinton took me through Hell," the victim said." See the video and read more here


Raped At 12-Years-Old, Victim Lashes Out At Hillary Clinton For Defending Attacker (Text)


Excerpts: " Raped at age 12, a woman now is lashing out at Hillary Clinton for defending her attacker, who got off with only a short jail term thanks to the young lawyer in Arkansas in 1975. The victim, Kathy Shelton, now is saying she wants to speak out so that people know the truth about the Democratic candidate for president. Shelton’s comments about the assault she endured at the hands of a 41-year-old attacker and the subsequent ordeal because of the attacker’s lawyer, Clinton, came in an exclusive interview with the London Daily Mail. Shelton said she was agreeing to be identified “because she is furious that her rapist’s defense attorney – Hillary Clinton – has been portraying herself as a lifelong advocate of women and girls on the campaign trail,” the report said. Shelton, now 54, was interviewed in Springdale, Arkansas, by Alana Goodman. Hear Shelton in her own words:


Excerpts: "Shelton told the Mail Clinton lied when she accused the then-12-year-old of “seeking out older men” and demanding she undergo a grueling psychiatric examination to determine whether she was “mentally unstable.” “I don’t think [Clinton’s] for women or girls. I think she’s lying, I think she said anything she can to get in the campaign and win,” Shelton told the Mail. “If she was [an advocate for women and children], she wouldn’t have done that to me at 12 years old.” ... Clinton later was interviewed by a writer who asked questions about the case, and the Free Beacon... Clinton laughed at how she was able the get a famous blood expert to undermine the forensic evidence, the attacker’s underwear, after the crime lab mishandled it. ... Clinton has said she was doing her duty to represent her client, but Shelton jumped on her explanation. “She didn’t mention that she was laughing and saying [Taylor] was guilty,” Shelton said. “I guess as a lawyer it is your responsibility to defend someone. But if she’s for women and children, why would she defend someone knowing that a 12-year-old got raped?” Read more at https://www.wnd.com/2016/08/raped-at-12-victim-lashes-out-at-hillary-for-defending-attacker/.


As usual SWRB does not necessarily agree with every point made in every resource or landing page to which we link -- we only agree with that which is in accord with what God teaches in the Bible.


Hillary Clinton: Your Kids Belong To The State (It’s the Government’s Job To Raise Your Children) 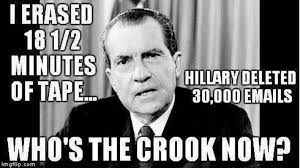 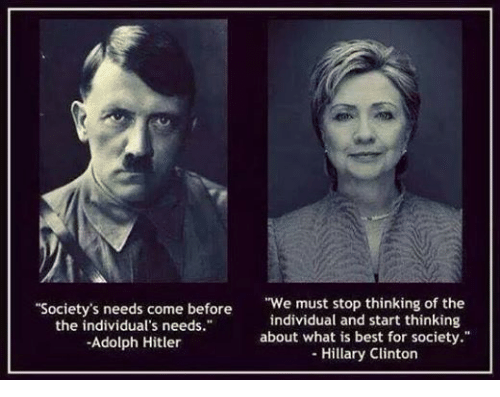 
The Puritan Hard Drive is the must have digital learning device for Puritan and Reformed studies.


There is no other way to get such easy, convenient and inexpensive access to so many great works from the best Reformation and Puritan preachers and teachers, past and present -- and the study software on the Puritan Hard Drive is out of this world in terms of usefulness!


If necessary, sell what you have (that does not draw you closer to God) to get the Puritan Hard Drive, and prayerfully use it until you become, by the Lord's sovereign and sanctifying grace, the most extraordinary Christian you can be (for His glory!).


- Pastor W.J. Mencarow (Reformation Church, Boerne, Texas - San Antonio area, https://worldunderchrist.wordpress.com/ and on Sermonaudio at https://www.sermonaudio.com/reformation), Author, Editor of The Paper Source Journal, and has been interviewed on numerous radio and TV programs including "Good Morning America," most networks and in major U.S. newspapers and magazines, etc.