Debating Worldviews with Muslims and Atheists (An Interview With Dr. James White About Taking Down Bad Worldviews) by Kevin Swanson (Free MP3)


Taking a position on truth is pretty unpopular today, but there are still some who have the courage to do it in the public forum. Dr. James White is one of the nation's most active Christian apologists and debaters, having debated atheists, Muslims, etc. over the last twenty years. Here Kevin Swanson interacts with James on how to engage the battle in the dangerous war of ideas - with meekness and fear.


"Someone on YouTube posted a portion of the 2003 BAM exchange on the sovereignty of God in salvation. Evidently, this person has a problem with God's freedom and decree. I provide a biblical response." - Dr. James White

The Power Of Depravity by Dr. James White (Free MP3)


This is Dr. White's closing statement from his debate against George Bryson held at the Anaheim Vineyard in Southern California. The full debate is available from https://www.aomin.org.


Why do people laud Richard Dawkins as a deep thinker? He is amazingly facile in his thought and his answers. Here is an example.

The New Atheists (Richard Dawkins and Others) by Dr. James White (Free Video)


Dr. White comments on the new Atheists and the vitriolic responses he has received from Atheists to the video, "The Insulting Richard Dawkins", listed above.

A List of More Debates By Dr. James White


This link is added because Mitochondrial DNA came up in the video above.

Reformed Forum Interview With James White, Author Of What Every Christian Needs to Know About the Qur'an (Free Online Audio)


Today we welcome Dr. James R. White to the program to speak about his book What Every Christian Needs to Know About the Qur'an. In the book, Dr. White presents Islamic beliefs about Christ, salvation, the Trinity, the afterlife, and other important topics. White shows how the sacred text of Islam differs from the teachings of the Bible in order to help Christians engage in open, honest discussions with Muslims. Dr. White is the Director of Alpha & Omega Ministries and is an active apologist and debater. He is the author of several books, including The Forgotten Trinity and The Potter's Freedom. Participants: Adam York, Camden Bucey, James White, Jim Cassidy

Dr. James White is the director of Alpha and Omega Ministries, a Christian apologetics organization based in Phoenix, Arizona. He is a professor, having taught Greek, Systematic Theology, and various topics in the field of apologetics. He has authored or contributed to more than twenty books, including The Forgotten Trinity, The Potter's Freedom, and The God Who Justifies. He is an accomplished debater, having engaged in more than fifty moderated, public debates with leading proponents of Roman Catholicism, Islam, Jehovah's Witnesses, and Mormonism. He is an elder of the Phoenix Reformed Baptist Church, has been married to Kelli for more than twenty-two years, and has two children, Joshua and Summer. 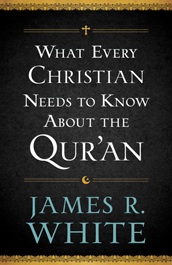 What Every Christian Needs to Know About the Qur'an (Book) By Dr. James White


"Dr. James White has written an immensely informative, carefully documented overview of Islam and the Qur'an--rich with fascinating historical, biblical, and theological analysis." - John MacArthur, pastor of Grace Community Church, Sun Valley, California. Learn What Islam Really Teaches, Straight From the Qur'an. Relying on the media and politicians to tell us what Muslims believe isn't going to cut it. Christians need to be better informed, whether the goal is to understand global politics or to talk to a Muslim neighbor across the street. Through fair and accurate use of the Qur'an and other documents, scholar and accomplished debater Dr. James White examines what Muslim sacred texts teach about Christ, salvation, the Trinity, the afterlife, and other crucial topics. This book provides the answers you've been looking for to engage in open, honest discussions about Islam with Muslims and others.

How to Witness to a Muslim (An Interview: Dr. James White) by Kevin Swanson (Free MP3)


If Muslims are walking into your neighborhood, as is the case in most Western nations, you might as well strike up a conversation with them and learn to engage with them on the matter of faith. Dr. James White presents a scholarly analysis of the Koran and the Muslim faith, walking through a methodology for witnessing to Muslims.


Noted apologist Dr. James White joins the panel on Christ the Center to discuss the challenges of reaching Muslims with the Gospel. Dr. White is Director of Alpha & Omega Ministries and has authored several books on apologetics as well as having been involved in several formal debates on various issues. Listen in on a very interesting discussion of Christian apologetics and the challenge of Islam.

Loyalty To God Above All by Dr. James White (Free MP3)


Listener Comment from SermonAudio: "Is God really first in your life? This sermon really convicted me as to the question above. The words of Deut. 13 are not easy words to be sure, though they do tell us much about how we are to love our God. I love the way the old and new testament Scriptures are brought together by Dr. White. The explanation he gives of how these words can be twisted and our need to have an answer is very good to know. Also that we need to leave the results of our answers, to Deut. 13, to God, to work out His own purposes. He teaches us how we end up with shallow love for the Lord. The ending is excellent, "...that every act of sin is a demonstration that we love something or someone more than we love God." May God give us the desires of His heart, to follow, fear and love Him most of all, with Jesus as our example and grace as our strength, we will do better to love Him most of all. Thank you Dr. White!"

As usual SWRB does not necessarily agree with every point made, or every position taken, in every resource to which we link -- we only agree with that which is in accord with the Bible rightly interpreted.

"In the history of extra-biblical study and research tools there has never before been a resource as useful as the Puritan Hard Drive."


With the Puritan Hard Drive I can now carry one of the largest Puritan and Reformed libraries in my pocket.


No matter where I am, as long as there is some form of power source to operate a computer, I have access to some of the best Puritan and Reformed literature available.


The wonderful portability of this massive Puritan library (and remarkable research software) makes the Puritan Hard Drive ideal for missionaries, students, or anyone who needs instant access to the best Reformation study materials in a variety of locations.


There is much more to the Puritan Hard Drive than just convenience, portability and the exceptional quality and extraordinary number of Reformation resources it includes. Even if a minister owned the largest printed Puritan library in the world, he would not be able to properly research the material. However, the KnowledgeBase software on the Puritan Hard Drive provides an effective road map to access the material in ways that are easy-to-use, organized and highly productive. With the click of a button, you can easily do ten hours worth of research in just seconds!


Having the Puritan Hard Drive is like owning the largest Puritan and Reformed Library in the world along with a full time research assistant with his PhD in Puritan Studies from Oxford or Cambridge.


Imagine not only owning the largest Puritan and Reformed library, but having a full-time team of world-class research assistants at your beck and call.


The high level of educational and scholarly functionality, combined with a marvelous library of over 12,500 top Puritan and Reformed resources and an extremely reasonable price, really makes obtaining the Puritan Hard Drive a stewardship issue. It is almost as if God is saying, "Here is a tool that will lead you to more truth faster than ever before. Make the best possible use of it and bring much glory to My Name." (2 Timothy 2:15, Ephesians 5:16).


As a member of the HeartCry Missionary Society, I am witness to the great needs of Christians throughout the globe. Possibly the greatest need is sound Christian literature. Even though many Third World pastors read English, they have very few good books available to them. Even if we could afford to buy each indigenous minister a small library, the cost of shipping would be astronomical.  With the Puritan Hard Drive we can provide pastors throughout the globe with one of the most complete Puritan and Reformed libraries at a fraction of the cost.


The Puritan Hard Drive is also ideal for situations where concealment is a priority in countries which are hostile to the Gospel. The Puritan Hard Drive is the most compact way to smuggle the light of over 12,500 Reformation resources (with powerful study software) into the spiritual darkness of those nations that are in most need of Gospel truth.