As with all links we list we only agree with that which is in accord with the Bible.


Federal Vision (FV) theology is one of the most convoluted and heretical body of teachings that has plagued our day. Many of the so called Federal Visionists have denied the imputation of Christ’s active obedience, gratuitous justification excluding works, perseverance of the saints and total depravity. Baptismal regeneration and a distorted view of election (conditional & changeable) are additional distinctives that have been circulated from within the FV camp. Thus the entire FV movement is heresy. It’s no wonder so many Reformed camps (ex: OPC, PCA, RPCUS, URCNA, PRC) have either rejected or condemned FV as heretical. These denominations have done their homework. Internet fan boys and benighted pastors should do the same.

Acolytes of this movement, like Doug Wilson, should never be given a hand in fellowship, a platform to speak, or any kind of public attention, unless he is being called to repent. Yes, it is true, almost 3 years ago, Wilson wrote an article titled, “Federal Vision No Mas.” But this does not exonerate him for being affiliated with the FV movement. Wilson did not repent for being one of the leading bastions of the FV movement and he never denounced FV as heresy, but instead said, “I would still want affirm everything I signed off on in the Federal Vision statement...” Wilson’s article “Federal Vision No Mas” was only an attempt to lose the label, “Federal Vision.” Consider his own words: “...but I think continuing to use federal vision as a label for any part of what we are trying to do here is only confusing things.”

Like most in the FV camp, Wilson is deceptive in couching his arguments, and will say that he believes in the active obedience of Christ and justification by faith alone. But anyone who has taken the time to read the reports by the PCA, OPC, RPCUS, URCNA and the PRC, or the position statements by the session of the Auburn Ave Presbyterian Church, will know that FV theology teaches that there are two stages of salvation (initial + final or future salvation). In the initial stage, FV heretics will say that sinners are saved by grace alone, though faith alone in Christ alone. But in the final or future salvation stage, they will import the words cooperation, obedience and works. The final salvation stage has certain conditions that men must fulfill. This is a false gospel. The Bible does not say that salvation has two stages. John Otis, author of “Danger in the Camp,” provides an excellent response to the two stage heresy: “This is not Reformed Theology. There is no such thing as initial or final salvation; either one is saved thoroughly at the start or he is not saved at all” (pg. 400).

Therefore, do not be duped by popular, internet apologists into believing that Wilson is a victim of slander or that FV is just a Presbyterian issue. Do your research on this matter. Note to New Calvinists: listening to James White’s so called “Dividing Line” or Jeff Durbin is not research. White and Durbin have offered nothing but sloppy opinions on Doug Wilson’s affiliation with the FV heresy. All of the Reformed denominations that have rejected or condemned FV have scrupulously examined what the Federal Visionists have propagated. Can you say the same? 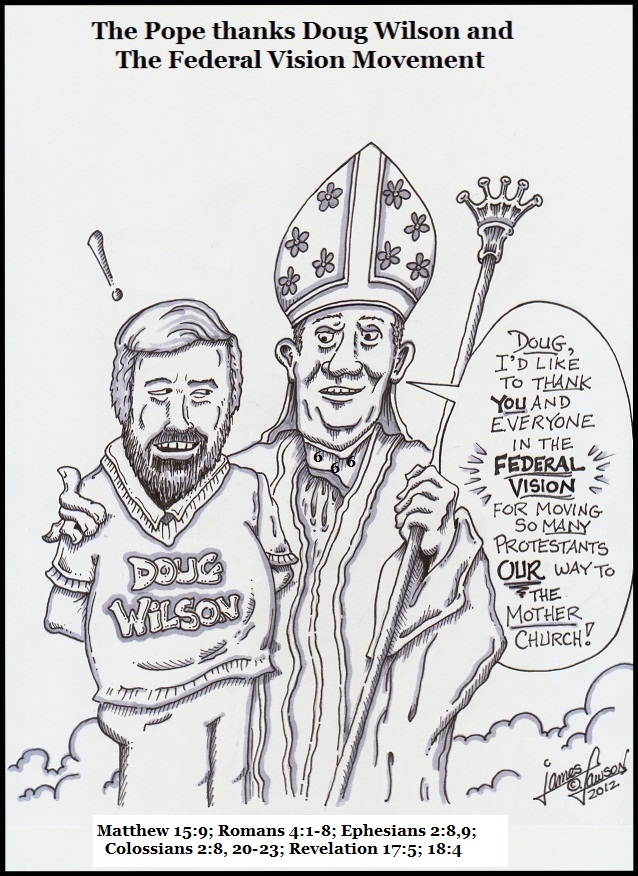 "It is with great comfort that I now rest in the bosom of the true Jerusalem Above, the Mother of us all, the One, Holy, Catholic, and Apostolic Church, and it with a great sense of gratitude to the FV (Federal Vision - ed.) communities, Christ Church and Rev. Wilson in particular for showing me the road of the sacramental life that eventually lead me there."

BOOK REVIEW: "Reformed" is Not Enough by Douglas Wilson reviewed by Drs. Matthew McMahon at "A Puritan's Mind."


This extensive book review contains much more proof that Doug Wilson is not only not Reformed (using the confessional and historic meaning of the word), but that he is also ignorant of many classic Reformation doctrines. Drs. McMahon writes,

It is this writer's opinion that Wilson has crossed the line from error to heresy based on conceptions propagated at the 2002 Auburn Avenue Pastor's Conference with three others--John Barach, Steve Schlissel and Steve Wilkins, as well as clarifying marks made here in his new book. These four men have been "labeled" the Auburn Four as a result of that conference. Wilson admits in his foreword that he began writing this book before the accusations to him and his colleagues came about by the Covenant Presbytery of the RPCUS in June of 2002. So he has included thoughts about the clarification of his opinion in later chapter (which happen to be some of the most blatant denials of orthodox doctrine in the book) rather than earlier ones.


This review is must reading, as it exposes much false teaching -- and is free online