Do you know when the first uninspired hymn was introduced to the Christian Church? Do you know when the first musical instrument was brought into the corporate worship of the church? When the Gospel was under attack, the Reformers fought for singing in corporate worship as exclusive Psalmists, and the Reformed church thereafter did the same. The Puritans were expositors on this subject in the Westminster Assembly and in their personal writings. This new compilation is a testimony to the biblical doctrine of Psalm singing.

The New Book On Exclusive Psalmody, Noted In the Video Above, Is Listed Below In Hardcover and Digital Formats 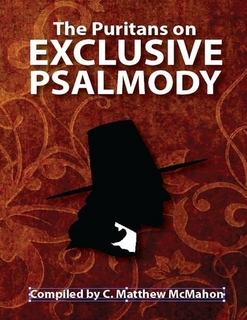 
It cannot be denied by any student of church history or of the Westminster Standards, that the Puritans taught Exclusive Psalmody. In the following compiled works the student of Reformed Theology will find able directives for Exclusive Psalmody, as well as a number of arguments they might not have thought about before. These works are a treasure trove of bible doctrine and able exegesis (by Thomas Ford, Cuthbert Sydenham, Nathaniel Holmes and John Cotton). The Puritans did not, in their age, teach anything that was not widely accepted. They are formulating no new doctrine. They are simply defending the truth of psalm singing originally commanded in God's word. This is the first time in the history of the church that these four works are now available to be read (much less read together). May this book be a breath of fresh air for the serious student of God's worship. Such truths direct those who are hungry for the truth of the word to Jesus Christ, who requires our obedience in the supreme human act of His sacred worship. This work is not a scan or facsimile and has been made easy to read with an active table of contents for electronic versions.

Psalm singing has been called the 'signature of Puritanism'... The English Puritans, being Calvinists and not Lutherans, held to the view that the only proper worship-song was that provided by God once and for all in the Book of Psalms. - Michael Bushell, Songs of Zion: A Defense of Exclusive Psalmody as cited in Dr. Reg Barrow's Psalm Singing In Scripture and History


Conclusively proves that the Westminster Standards teach only exclusive Psalmody regarding the use of worship songs.


Chapter 1: The Scriptural Law of Worship

Chapter 2: The Testimony of Scripture

Appendix: The Westminster Confession and Psalmody

The printed book is also for sale at https://www.reformedonline.com/books-for-sale.html.

Gradual Reformation Intolerable: A Brief Inquiry into the Actions of Luther and the Writings of Calvin in Reforming the Church Against False Teaching and False Worship. by Dr. C. Matthew McMahon (Free Online Article)


"Gradual reformation is not the matrix in which the church has functioned since its inception in the Garden of Eden... It would be wise imitating Hezekiah, Josiah, Luther, Calvin and the Lord Jesus Christ in the achievement of immediate reformation. Compromise is a lie. Gradual reformation in this regard is intolerable; both for the people of God who are deceived as to what real reformation and truth are about, and to the minister who compromises his beliefs, and neglects the honor of God's desire in true spiritual worship." - Dr. C. Matthew McMahon, from Gradual Reformation Intolerable

Hymns and Heretics: The Dangers of Uninspired Hymnody by Brian Schwertley (Free MP3)


Are You Singing Heresies In Songs By Heretics? Find out in this sermon. A fascinating look at how Satan has used various heretics (like Isaac Watts, a Unitarian, Roman Catholics, etc.) to introduce man-made hymns into the church (to push God's Word out of public praise) and the destruction this has wrought, especially to the biblical unity of the church.


Psalms of David in Metre (FREE PSALTER, PSALMS FOR SINGING) being the Scottish Metrical Psalter, first authorized by the Westminster Divines and then also by the General Assembly of the Church of Scotland [in 1650], with notes by John Brown of Haddington (SWRB Blog and Free Online Book)

"It is the supreme advantage of the Psalm-singer that his songs are from God, and that therefore they embody the truth of God - the whole truth, and nothing but the truth. On the other hand, it must ever remain the embarrassment of those who use uninspired compositions in the praise of God that their hymns are at best but human conceptions of the truth. Such compositions bear upon them necessarily the impress of the writer's peculiar views. They betray almost certainly in letter as in spirit a denominational bias. Uninspired hymns are, and of necessity must be, sectarian. If this be true, it follows that such hymns are subversive of the unity of faith; for by all the power of song to stir the heart and mold the thought and make theology they accentuate and perpetuate the differences that divide the Church. There is something truly anomalous in a Church preaching the unity of believers and praying the prayer of Christ that 'all may be one,' and at the same time singing the songs that by their sectarian bias and denominationalism foster the divisions thus deplored." - Charles H. Robinson, D.D., "The Catholicity of the Psalter," pp. 394-395, in The Psalms in Worship, edited by John McNaugher and also available on the Puritan Hard Drive. 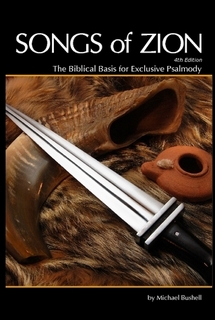 Songs of Zion: The Biblical Basis for Exclusive Psalmody by Michael Bushell (Softcover or Hardcover Book)


What music does God want His people to sing in worship? The question provokes strong emotions, but the answer must be solely based on Scripture. We live in a culture where personal preference dominates, where men recoil from the full display of God's mercy and justice, and where the winds of fancy blow about a church ignorant of her history. This book calls the reader to prostrate himself before a thrice holy God, to echo His tender and fearsome Words in song, and to return to the historical worship practice of the Christian church. This extensive revision is the fourth edition of a widely-circulated presentation of exclusive psalmody.

"There is good reason to believe that the first to introduce uninspired hymns in worship were errorists, who sought by this means to diffuse their peculiar tenets. To this device Valentinian, a Gnostic, resorted with the purpose of giving currency to his heterodox sentiments. This charge is brought against him by Tertullian, who flourished in the early part of the third century. The Syrian Church was afflicted at an early date with hymns produced by Bardesanes, and his son, Harmonius, in the interest of the fantastic speculations of Gnosticism.


At a later date, when the Arian heresy arose, the same method was extensively employed for promoting its spread. In the streets and in worshipping assemblies hymns imbued with Arian sentiments and set to catching music were extensively sung. The Psalms were not adapted to serve the ends of those who were engaged in a war against the dignity of Christ. Recourse was, therefore, had to the preparation and use of hymns for the diffusion of Arian doctrine. The same expedient is employed in modern times, when various sects, deserting the one central, ecumenical hymn-book, furnish themselves with hymn-books framed to express and propagate their respective tenets.


It is beyond question that one effect of the adoption of hymns by the heterodox, as a vehicle of their views, was to induce the orthodox to resort to the same expedient for the defense and dissemination of truth. For instance, in the Syrian Church Ephraim, commonly called "Ephraem Syrus,"who died 379 A.D., wrote a large number of hymns to counteract the baleful influence of those put into circulation by Bardesanes and Harmonius aforenamed; and these controversial odes soon began to be used in the worship of that Church. In like manner in the early part of the fourth century the propagation of Arian views by hymns gave rise to a counter-movement on the part of the orthodox in the form of hymns extolling Christ as God. So also Augustine, an intense lover of the Psalms, was induced to prepare a hymn after the model of the One Hundred and Nineteenth Psalm in order to cope with the Donatists, who were diligently diffusing their tenets by means of hymns. Thus it may be said that by good motives the orthodox in the Post-Apostolic times were led to take steps which issued in the supplanting of the God-given Psalmody by uninspired effusions."


FROM: "The Suitableness and Sufficiency of the Psalter for Christian Worship" by Rev. John A. Henderson, D.D., pages 191-192 in The Psalms in Worship edited by John McNaugher


Foundation for Reformation: The Regulative Principle of Worship (RPW, Sovereignty of God In Worship) by Greg Price (Free MP3 & PDF)


Calvinism, or the Sovereignty of God, in Worship (Free Online Books Against Arminianism In Worship)

Pastor of Liberty and Grace Reformed Church in Northern Virginia


For a number of years now, I have followed, and benefited from, the work of Still Waters Revival Books, particularly the Reformation and Puritan Bookshelf CD sets... and now the Puritan Hard Drive.


The Puritan Hard Drive is a remarkable accomplishment!


The common Christian can now have a world-class Presbyterian and Reformed library at his fingertips, for only pennies per volume.


I do not think that it is an exaggeration to say that the Puritan Hard Drive presents an historic and singular opportunity.


The works on the Puritan Hard Drive have been invaluable to me in sermon preparation and in improving personal and familial piety. If these had been the only blessings attached to the reading of these documents, the expense (even if it had been much greater) would have been justified; but there is more here.


In this present time, a great many Presbyterians (particularly in North America) have forgotten and implicitly (perhaps unwittingly) rejected their Presbyterian heritage. Strangely, Westminster confessing churches have rejected the theological distinctives of the Westminster Standards.


However, we may yet entertain the hope that these great attainments are rejected largely because of ignorance. The best books on these subjects have not been readily available; but (thanks be to God) they are available again on the Puritan Hard Drive.


For anyone interested in recovering our Presbyterian and Reformed past, the Puritan Hard Drive is a must.


- Dr. Steven Dilday, Pastor of Liberty and Grace Reformed Church in Northern Virginia https://www.libertyandgracereformed.org/ and https://www.sermonaudio.com/PRCNOVA, President of The Matthew Poole Project https://www.matthewpoole.net/, Professor of Hebrew and director of the Ph.D. program in Puritan History and Literature at Whitefield Theological Seminary https://www.sermonaudio.com/sermoninfo.asp?SID=82911013359, also directs the Master of Theology degree in "Ecclesiastical Latin." Dr. Dilday is currently translating the "Synopsis" written by the Puritan Divine, Matthew Poole https://www.matthewpoole.net/aboutSynopsis.html. This project when completed will consist of approximately 82 volumes.