Are You Looking For A Covenanter Church Or Are You Interested In Covenanter Worship (Along The Lines Of The Original Intent Of The Westminster Standards)? If So, Please Email Pastor Greg Price At covpastor@gmail.com For More Information About How To Take Part In A Covenanter Service, From Your Location, Via Conference Call. Over 600 Free MP3 Sermons By Greg Price Are Also At https://ow.ly/NTvq30m3wuu.


Excerpt: Abu Ammaar Yasir Qadhi, a Memphis Imam based in Tennessee, preaches openly about what Islam truly is. He makes no bones about thinking that anyone other than a Muslim doesn't deserve anything and are less than Muslims. In fact, part of Yasir Qadhi's preaching includes rhetoric that says non-Muslims lives are forfeit and their property is legal for Muslims to take in jihad, (and this would include women as sex slaves). Recently Yasir Qadhi said that "Jews and Christians are filthy, their lives and property can be taken in jihad by the Muslims." 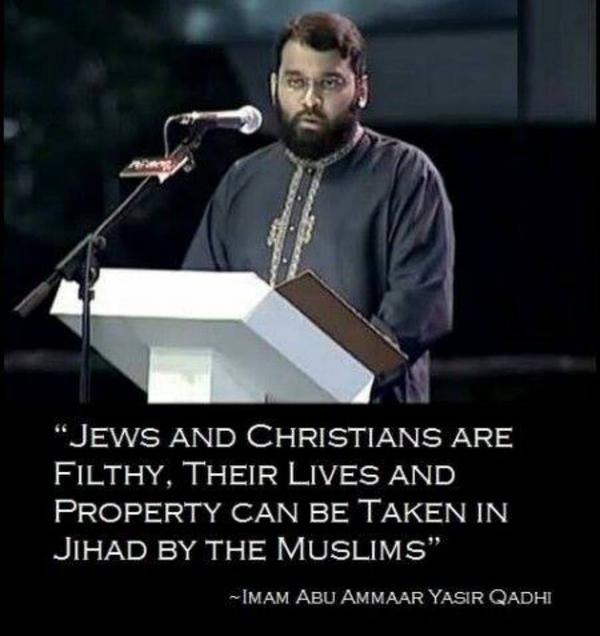 As usual SWRB does not necessarily agree with every point made in every resources to which we link -- we only agree with that which is in accord with the what God teaches in the Bible.


Excerpt: Muhammad said: "Whoever changed his Islamic religion, then kill him" (Bukhari 9.84.57). The death penalty for apostasy is part of Islamic law according to all the schools of Islamic jurisprudence. This is still the position of all the schools of Islamic jurisprudence, both Sunni and Shi'ite. Sheikh Yusuf al-Qaradawi, the most renowned and prominent Muslim cleric in the world, has stated: "The Muslim jurists are unanimous that apostates must be punished, yet they differ as to determining the kind of punishment to be inflicted upon them. The majority of them, including the four main schools of jurisprudence (Hanafi, Maliki, Shafi`i, and Hanbali) as well as the other four schools of jurisprudence (the four Shiite schools of Az-Zaidiyyah, Al-Ithna-`ashriyyah, Al-Ja`fariyyah, and Az-Zaheriyyah) agree that apostates must be executed." There is only disagreement over whether the law applies only to men, or to women also - some authorities hold that apostate women should not be killed, but only imprisoned in their houses until death. Clearly some Muslims believe this death penalty extends to those who facilitate the conversion as well as to the convert. 3 family members charged in Texas 'honor killing' of Iranian activist," CBS News, April 23, 2015 (thanks to The Religion of Peace).


What the Media Often Hides About Islam: Muslims Targeting and Murdering Christians ("Are You Muslim or Christian?" "Death to Christians!") by Raymond Ibrahim


Many people in the West are wondering what causes jihad. CNN anchor Brooke Baldwin invited Christopher Dickey, foreign editor of the Daily Beast, to explain. According to Mr. Dickey, terrorism has nothing to do with Islam. Instead, terrorism is the result of three factors: (1) testosterone, (2) identifying with an oppressed group, and (3) a desire for fame. Is he right? Let's take a closer look.


Many people are confused by jihad. If Islam is a religion of peace, why is there a persistent problem of radicalism in the Muslim world? If Islam is the problem, why are there so many peaceful Muslims? These difficulties dissolve when we realize that jihad isn't the product of a single factor, but of three factors: belief, knowledge, and obedience. These three factors come together in what we'll call "The Jihad Triangle."


EXTREMELY GRAPHIC, DISTURBING VIDEO. This is an uncensored video of a Christian man being beheaded in Tunisia. Only watch if you are able and willing to see an extreme level of violence. Excerpt: "Liberal talk show host Tawfiq Okasha recently appeared on "Egypt Today," airing a video of Muslims slicing off a young man's head off for the crime of apostasy -- in this instance, the crime of converting to Christianity and refusing to renounce it. The video-be warned, it is immensely graphic-can be seen at the link above (the actual execution appears from minute 1:13-4:00). For those who prefer not to view it, a summary follows: A young man appears held down by masked men. His head is pulled back, with a knife to his throat. He does not struggle and appears resigned to his fate. Speaking in Arabic, the background speaker, or "narrator," chants a number of Muslim prayers and supplications, mostly condemning Christianity, which, because of the Trinity, is referred to as a polytheistic faith: "Let Allah be avenged on the polytheist apostate"; "Allah empower your religion, make it victorious against the polytheists"; "Allah, defeat the infidels at the hands of the Muslims," and "There is no god but Allah and Muhammad is his messenger." Then, to cries of "Allahu Akbar!" - "Allah is greater!" - the masked man holding the knife to the apostate's throat begins to slice away, severing the head completely after approximately one minute of graphic knife-carving, as the victim drowns in blood. Finally, the severed head is held aloft to more Islamic slogans of victory. Visibly distraught, Tawfiq Okasha, the host, asks: "Is this Islam? Does Islam call for this? How is Islam related to this matter?... These are the images that are disseminated throughout the electronic media in Europe and America. Can you imagine?" Then, in reference to Egypt's Muslim Brotherhood and Salafis, whose political influence has grown tremendously, he asks, "How are such people supposed to govern?" Only the other day, a prominent Egyptian Salafi leader -- referring to the canonical hadiths, including Muhammad's command, "Whoever leaves his religion, kill him" -- openly stated that no Muslim has the right to apostatize,or leave Islam. Any number of Islamic legal manuals make explicitly clear that apostasy is a capital crime, punishable by death. The first "righteous caliph," a model of Muslim piety, had tens of thousands of former Muslims slaughtered - including by burning, beheading, and crucifixion - simply because they tried to break away from Islam. According to the Encyclopaedia of Islam, the most authoritative reference work on Islam in the English language, "there is unanimity that the male apostate must be put to death." Finally, a word on the "prayers" or supplications to Allah made by the Muslim executioners in the video: these are standard and formulaic. In other words, these are not just masked, anonymous butchers who pray to Allah as they engage in acts of cutting throats and holding up heads, these are top-ranking Muslim leaders, who appear regularly on TV, who invoke such hate-filled prayers. See here for examples of Muslims supplicating Allah to strike infidels with cancer and disease "till they pray for death and do not receive it;" there are even formalized prayers in Mecca, blasted on megaphones as Muslims honor their obligation to go on a pilgrimage at least once in their lives, supplicating Allah to make the lives of Christians and Jews "hostage to misery; drape them with endless despair, unrelenting pain and unremitting ailment; fill their lives with sorrow and pain and end their lives in humiliation and oppression."


The Satanic Savagery Of Islam: The Taliban School Slaughter and Beheading Children

Beheadings: "Allah Made Me Do It" by Daniel Greenfield


To the Very Hour! God's Omnipotence, Omniscience, Omnisapience, Etc., On Display In the Perfect Historical Fulfillments Of Prophecies, In Revelation, Regarding the Rise, Expansion and Fall Of Islam and the Papal Antichrist, and Much More (Free Christian MP3s, Videos, Books)


As usual SWRB does not necessarily agree with every point made in every resource to which we link -- we only agree with that which is in accord with the what God teaches in the Bible.